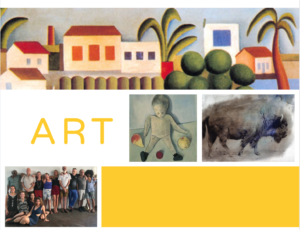 When I was 14 years old, I wanted to study Arts in Florence. My family took it as one of my eccentricities and was happy when I  forgot about the subject.

During college, however, I was still very much interested in ALL artistic manifestations and always looked for an opportunity to learn more about it: organising, hosting, or writing for the  events  that happened at the University.

After graduation, I got the privilege to work at Roberto Marinho Foundation, the biggest Media Tycoon in Brazil those days. I assisted in the organization of the exhibition “The Century by a Brazilian” of his Art Collection when he passed. The picture you see in the middle above is called “ The boy” by José Pancetti, Dr Roberto’s favorite piece.

The love for art came back when I signed the at a Hora do Brasil Foundation’s Creative Direction, from 2014 to 2019 in Amsterdam . I co-founded and developed concepts and projects since 2005. The Tarsila Platform for Art, Urban Poets Platform for Storytelling  and the Roots of Brazil platform for music were born then. Most of the time though they were closed connected throughout the programs developed in those 4 years.

Under the name of Tarsila do Amaral, one of the founding artists of Brazilian modernism, the main art projects* developed were:

* organised in cooperation with and CARP-Brazil.

Want to know more about how we can develop creative arts projects together?